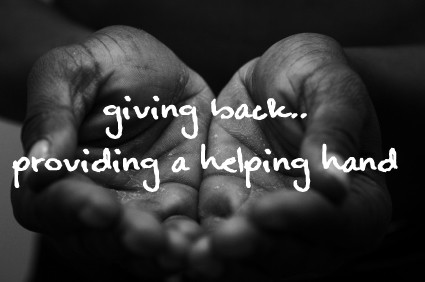 It may be hard to imagine, but the holidays are just a little more than two weeks away! If you’re prepared for this then your holiday shopping is complete, presents are wrapped and hiding safely where the little ones won’t find them and you’re putting the finishing touches on your holiday meal. The remaining ones who are still getting ready for the festivities will be fighting long lines and rude people just about everywhere they go. It’s sad really, considering that this is supposed to be a joyous and generous part of the year.

Truth be told, as we race around to get everything done and rack up a lot of debt on our credits cards; many of us feel like we have to do this or are obligated to because of some standard that was most likely set long before we were even born and ingrained into us by our loving parents. Not to disparage loving parents and tradition, but the point of this time of the year is celebration and charity, not selfishness or obligation.

If you want to give out gifts, then by all means to so until you’ve had your fill but, if you’re only doing it out the idea that you’ll get something in return then you’re missing the whole point of the season! What’s worse is that if you’re doing this because you have some image to maintain, then I don’t even think you could grasp the concept of the meaning of the season. Go ahead, get offended.

On a single night in January 2014, 578,424 people were experiencing homelessness—meaning they were sleeping outside or in an emergency shelter or transitional housing program. What do you think it would mean to any one of them if they were to receive a warm blanket or a hot meal? To some, it could mean the difference between life and death. What if you were to take the time this season and volunteer at a homeless shelter and see, first hand, what it looks and feels like.

Most of us have seen brief glimpses of this on the streets or portrayed in movies and assume that they’re there by some sick choice (drugs or alcohol come to mind), but did you know that in that nearly 600,000 people, there are veterans (most need mental health assistance and can’t or don’t know how to get it), minors (under 18, that have been kicked out of their homes for a variety of reasons including being gay) and domestic abuse victims (who had no other choice or would face physical injury or possibly DEATH). Are there people out there with drug and alcohol addictions? Absolutely!

What can you do? Volunteer your time. I know it’s a busy time of the year for many people, but would a few hours (1-4) actually impede your life? Maybe the question should be what could that same hour(s) do for someone that is homeless this season? Remember why we celebrate this time of year and do your part. I can promise that you will not feel the same about homelessness after just one time you volunteer at a shelter or donate to someone that lives on the street!